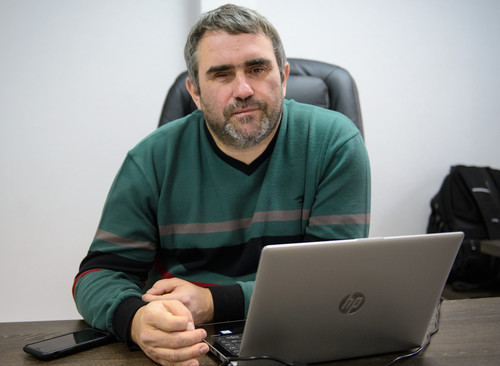 Author and researcher of the extrability phenomenon. One of the authors of the collective monograph "Extrability: a technique for inclusive interaction of blind people" (2020).

President of WHITE CANE, founded in Ekaterinburg in 2010.

Ideologist and head of the international project "Sails of the Spirit". For 10 years, the inclusive team has held dozens of social and cultural events with the participation of representatives of various socially excluded groups living in the Russian Federation, in most European countries, Turkey, Egypt, and neighboring countries. The partners of the Sails of the Spirit project are organizations from the Netherlands, Germany, Latvia, Lithuania, Estonia, Cuba, Israel, Armenia, Uzbekistan.

Developer, organizer and head of programs for the formation of an inclusive culture: "Business City", "Cross rehabilitation", "Formation of communicative competence for interaction with people with disabilities."

Permanent member of the organizing committee of the International Scientific and Practical Conference "Extrability as a phenomenon of inclusive culture".

The idea of ​​the hidden abilities that are appeared in the process of successful socialization was born after analyzing the results of our first expeditions with the Sails of the Spirit project. I am a blind person, but I wanted to learn travel on a sailing yacht. We went in the same carriage with a sighted person, lived and worked for several days under the sea expedition conditions . At the beginning I thought that I was  only the one who  have learned and developed my abilities, acquired new competencies. But the feedback from the skippers and other participants who were with us on the yacht showed that they have discovered new talents in themselves too. After that, it turned out that other blind people, in their sea voyages, had a similar influence. And we saw that without us, blind people, people without disabilities could not open these abilities in themselves.

I proposed the term “Extrability” - abilities that were previously dormant, but with properly organized inclusive interaction, awakened and qualitatively changed life.  I, as a blind person, develop the talents every day for my socialization turn out to be amazingly useful for all other people. Today we find specific extrability among members of all socially excluded groups. For more than ten years I have been involving people with disabilities, people without disabilities in such activities. We call this process of mining hidden talents Social mining.

Extrability in the metaphor of social mining becomes new energy for improving civil society, for building an inclusive economy, for awakening vital interest to a new level. Therefore, we look differently at the Sustainable Development Goals and at interaction with socially responsible business.

Extrability is a fundamental transformation of the human condition.